Been @ Emu park for 9 days. Great relaxation. This being Saturday we will be leaving Monday.

Off to Possum Park. An old WW2 aerodrome. Pm the Brisbane line.

We will leave our impressions when there.

We have escaped the cold and are at Ayr Northern Queensland. About 100Km south of Townsville.

In the rivers there is whiting and flathead. Caught some. 3 were keepers.

Will stay here for another week. Excellent.

I bought a Jeep. Yep a Grand Cherokee. Now we can pull that caravan all over Australia.

Zara having a bounce at Lorne

The weather was abysmal. Rain or showers for 4 days.  But to be fair the temperature was about 20 degrees.

Warm enough to go boogie boarding, with a wetsuit on 🙂 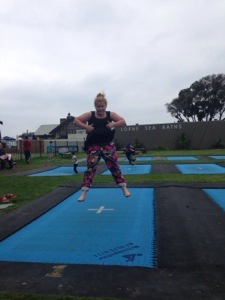 It’s been a while since we were in touch here is a brief outline as to our adventures during the past month.

Our time in Broome was great we had good accommodation, within walking distance of Cable Beach, next door to Divers tavern if you know Cable Beach.

Our full day at Horizontal Falls was an OMG experience.

We were picked up at 5.30am in 4×4 bus “bigfoot” visiting Beagle Bay (Church with Pearl Shell alter) Cape Leveque (only last week had to be evacuated due to bush fire) and One Arm Point.  We then boarded a 14 seat seaplane for a direct flight to Horizontal Falls. So low over all the islands you felt like you could touch them, our landing on Talbot Bay was a thrilling experience.  After a beautiful lunch we were put into a 600hp boat for a very fast ride though the Falls, not once but many times – the tidal pull is amazing.  Our return to Broome was again on the seaplane over the Buccaneer Archipelago – many photos.  Wonderful day.

Our next stop was Barn Hill this had been recommended. It was so rustic. Beautiful site amongst trees, spent 5 nights enjoying the beach, big walks as well as fishing, no luck there.

Then off to Eighty Mile Beach very structured Park and very windy while we were there.  The beach was just white sand, turquoise water from left to right as far as you could see.   Beach is covered in shells I have never seen so many.

At high and low tide fisherman (or men with rods) come out to catch the big fish.   Graham had to wait till last day before BINGO, a 0.8metre White Shark what excitement and how beautiful it was to eat.

Next  was Port Hedland a nice park, good position.   We were close enough to walk and see the staircase to the moon. Do hope our photos come out well.

Port Hedland is one of the world’s largest and busiest working harbours full of many cargo ships.  We counted 16 waiting at heads to come in.

Did a tour of BHP, town tour and Harbour tour to show all cargo ships being loaded, view from the water was of great interest.

Next was Point Samson a beautiful beachside park, with lovely walks, swims in Honeymoon Cove also many close attractions  BUT only couple hours out on the beach had me covered in sand-fly bites.  From then on I was covered up.

We left 2 days early as I do believe every sand-fly in district was after me.

We drove to Karratha and Dampier had a good look around found the AEO and voted.  There is so much infrastructure happening, roads, bridges and train tracks. WA is where all the money is.

Having left Port Samson early we decided to head inland –to give me a chance to recover – Tom Price was our destination we got as far as Beasley River and did a “free camp” found some wood and lit a camp fire – lovely evening.

Arrived at Tom Price our Caravan Park has to be 50% filled with mine workers.   Did Rio Tinto Mine tour lots of photos – gosh everything is big & bigger.    Sunday we are doing the Karijini National Park visit some of the gorges.

On Monday we head back towards coast and will  do a “free camp” then into Exmouth.

Well here we are 6,922kms and 40 days and yes we are in Broome,  our unit is very comfortable, hot running water, kitchen, shower toilet all those wonderful  items we take for granted.

Had 4 lovely days in Derby, couldn’t believe my eyes as I walked into reception out rides Marg and Ian Vesey on the bikes, what a small world. Marg and Colin Parsons and Jenny and Red Lacey also in park.   A few cold drinks and much chatter in the evenings.

The range of tide heights vary around 10 – 12metres it is an amazing site.

Did a day trip to the Gorge and Tunnel Creek the water level  was around my knees and so cold, but a great tour.  Flat tyre and 45min while it was changed was an extra this added on to the end of day we didn’t get back till after 7.00

Did the Broome Races yesterday that was a great day, the organization was top notch.   Market this morning, off to the beach soon, and of course another beautiful sunset later.

Doing Horizontal Falls full day tour on Wednesday that will be a great highlight.

Next Sunday we leave here for Barn Hill, than Eighty Mile Beach lots more to see and do.

When  you look at Aussie map Wyndham is the most northerly town in WA situated on the Cambridge Gulf, 3216m north east of Perth. It is also home to the biggest salt water crocs in the world.

From Longreach we have stayed Winton  (did outside cinema at night).

Cloncurry – hottest temp ever recorded 53.1 maybe that’s why Curry is in the name.

Daley Waters  chilli still there and Barra and Beef dinner, still no improvements.

Katherine  about 6kms out near hot springs, did Cutta Cutta caves that was good.

Now its Wyndham – this has been a great surprise our small caravan park  has plenty of shade and the amenities are probably the best we have had.    Graham has fished the last 2 days caught some small cat fish but no meals.

We did the 5 rivers lookout last night before sunset a wonderful sight the rivers Durack, King, Forrest, Ord and Pentecost all Flow into Cambridge Gulf.    From the lookout you could watch road trains 4 containers unload the Iron Ore to go onboard the freight ships at high tide.

Our camper trailer and car have travelled well only had 4 nights not using the camper, we seem to have a good system going when we put it up and take it down.

We are enjoying the most beautiful weather since Cloncurry it has been between 28-34 and nights around 18deg have not put a long sleeve top for over 3 weeks.

Will close now, will post from Broome (if your lucky) please give us some news from home.

Just a quick note to let you know we are at Winton, dino country, a pleasant 23deg expected 27, will give a more detailed email when we arrive in Mt Isa

On Friday staying there for 4 nights.

Well what a month we have had left on 26th June with our 2 granddaughters Nyah and Zara on a once in a lifetime trip to Hong Kong, London, Paris, Wales,

Scotland then home via Hong Kong what a great 15days of go go, shop shop, it was a great experience for us all. (some photos on www.burrellfamily.com.au)

Well 12 days at home get over jet lag, pack our camper and we are off heading to Broome and down West Coast, hope to be back by Melbourne Cup gosh

life is hard, we are currently at Bourke it is a lovely 20 degrees, this

is our second day doing the Paddleboat at 3.00, just enjoying the sunshine.

It is Sunday and here we are in Mildura.  Beautiful and sunny.  But, not may I say, getting here.  Rain, sleet and an outside temperature of 8 degrees.

Been around our favourite places. Today just chilling out.

Have had someone looking through the house over the weekend.  Second time for these people.  We will see.

Added note.  Used 12v socket provided in the trailer. Plugged in the 12 volt to USB mini plug (12v to 5V).  Well it took about 2 seconds until an acrid smell and lots of smoke.  Melted the device.
I guessed that the 12v polarity was wrong.  Back at home. Yep; I was wright. Drilled out the rivets and removed the socket, swapped the wiring.  Now all is well, apart from the loss of a Tom-Tom 12v converter.